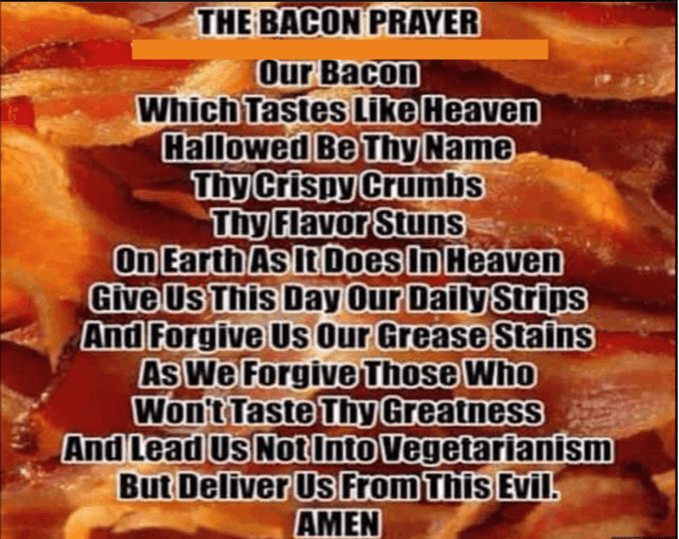 The bacon lovers prayer is for those folks that believe that everything that is good to eat is better with bacon. You either are or know one of these people. Wikipedia describes bacon this way:

Bacon is a meat product prepared from a pig and usually cured. It is first cured using large quantities of salt, either in a brine or in a dry packing; the result is fresh bacon. Fresh bacon may then be further dried for weeks or months in cold air, or it may be boiled or smoked. Fresh and dried bacon is typically cooked before eating, often by frying. Boiled bacon is ready to eat, as is some smoked bacon, but may be cooked further before eating.
en.wikipedia.org · Text under CC-BY-SA license

There are many different types of bacon. They include thin sliced bacon, thick cut bacon, Canadian bacon, low sodium bacon, pork bacon and even turkey bacon. While bacon lovers like to eat bacon all by itself they also love to use it to complement other foods and recipes. Enjoy the recipes that we share that are bacon wrapped. We do!
Share the Bacon Prayer with your fellow bacon lovers!
Tweet
Pin
Share
0 Shares

BBQ Sauce Selection or How To Choose The Right Barbecue Sauce

Bourbon Maple Syrup Glaze Is Wonderful With Meat And Fish

How To Make Smoked Salmon In A Bradley Smoker

BBQ Sauce Selection or How To Choose The Right Barbecue Sauce